I have been in recovery for 5 years now.

A series of events occurred in my life, which were out of my personal control. The death of my Father pushed me over the edge and triggered my need to control something. In my case, I coped by controlling the one thing I could, my weight and what I ate. At the age of 18, I was diagnosed with anorexia nervosa.

For me, my eating disorder wasn’t about being slim and fitting into what today’s ‘ideal’ is, the notion that thin is beautiful. Instead it gave me a focus, a form of escape. Whilst I was ill, I didn’t have to face the underlying reasons as to why I was in this situation in the first place.
I started by cutting out high fat and high sugary foods, followed by carbohydrates, dairy and protein. I would fill myself up on coffee and diet coke throughout the day and spend endless hours in the gym. I had my ‘safe foods’ but at my worst, I was only eating half a cup of bran flakes before bed. 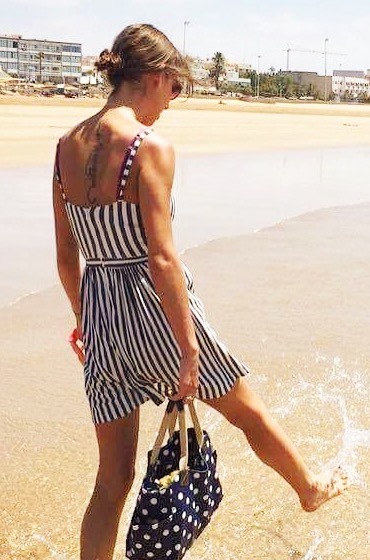 My weight plummeted quickly. I was banned from the gym due to my BMI being too low, and not long after, was admitted to an eating disorder unit for the first time. I was placed on bed rest for six months. I knew, however, that as soon as I was released from treatment, I would go back to my daily routine, with a few added tricks that I had learnt from the other girls in treatment.
Not long afterwards, my anorexia developed into bulimia and binge eating. My whole day consisted of eating and purging, only leaving my house to get more food.

I was admitted into treatment another six times. At my lowest weight, I was five stone and had a BMI of 12. I was physically and mentally exhausted, my bones stuck out, and it hurt to take a bath or even sit down.
The treatment I had received only made my eating disorder worse, so my Mother sent me to rehab in South Africa, where I received extensive counselling and began increasing my food intake at my own pace. It was there that I came to the realisation that a contributing factor to my eating disorder was a desire to make myself unattractive, childlike and boyish, due to sexual assault I had suffered at a young age.

I have been in recovery for 5 years now. I still can’t go out and have a burger and chips, but I eat enough of the right foods, I enjoy eating and I even look forward to meal times.

Even so, I deal with the effects of my eating disorder every day. I have osteoporosis, my teeth are ruined, my hair fell out and has never been the same since, my menstrual cycle stopped and I can no longer have children. I was once a popular, outgoing, carefree girl with lots of friends, but after I developed anorexia I didn’t have time for them anymore and they didn’t understand what was happening to me; my eating disorder was my best friend.

Since returning from South Africa, it has been my sole ambition to help others going through the same situation, educating those suffering from or affected by an eating disorder, and trying to diagnose it early. The longer someone suffers, the more ingrained the behaviours become and the harder it is to fight.

That’s why I wanted to make the video and be involved in rewrite your story. It is impossible to know what it is like to experience an eating disorder, or how powerful it can be, unless you have experienced it yourself.

Everyone’s story is different, but my personal turning point was during a show performed by the children in the shanty villages in South Africa. A little boy, who probably hadn’t eaten a decent meal his entire life, asked me why I was so skinny.

In that moment I realised, there are people all over the world who starve every day and do not have a choice. I did, and I chose to live.

If you’ve suffered from eating disorders or are a parent or carer, we would like to hear from you.

By sharing your story we can build hope for others affected by eating disorders, and help them rewrite their story.

Don’t Miss out on the latest articles, news & fundrasing events.

Straight to your inbox.

This website uses cookies to improve your experience while you navigate through the website. Out of these cookies, the cookies that are categorized as necessary are stored on your browser as they are essential for the working of basic functionalities of the website. We also use third-party cookies that help us analyze and understand how you use this website. These cookies will be stored in your browser only with your consent. You also have the option to opt-out of these cookies. But opting out of some of these cookies may have an effect on your browsing experience.
Necessary Always Enabled
Necessary cookies are absolutely essential for the website to function properly. This category only includes cookies that ensures basic functionalities and security features of the website. These cookies do not store any personal information.
Non-necessary
Any cookies that may not be particularly necessary for the website to function and is used specifically to collect user personal data via analytics, ads, other embedded contents are termed as non-necessary cookies. It is mandatory to procure user consent prior to running these cookies on your website.
SAVE & ACCEPT
Go to Top